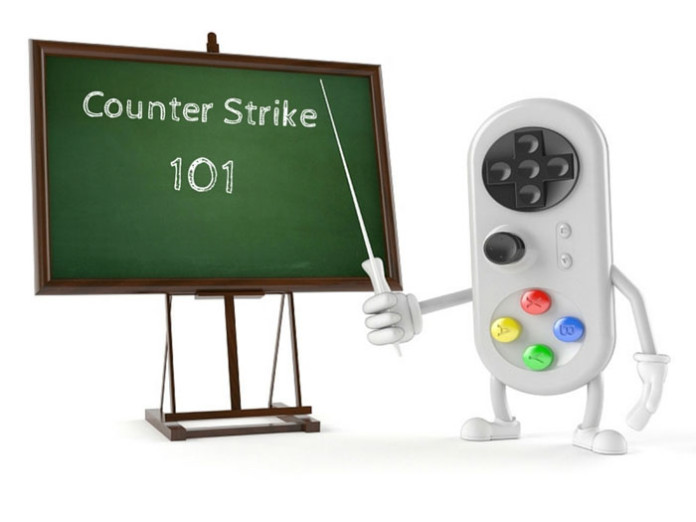 When you first start a game, you can hold down the Tab key to examine your team, score, kills, takedowns, and other pertinent information. Traditionally, the first round on a new map each player will start with $800, a knife (slot 3), and a pistol (slot 1).Terrorists are highlighted with the color red, and counter-terrorists (CTs) are highlighted with the color blue.

There will be two bomb locations per map, each labeled A or B. The terrorist with the bomb uses slot 5 to plant the C4 at a bombsite, and takes 3 seconds to plant. Once the bomb has been planted, the C4 will emit a loud beeping noise that gradually increases in tempo. After 45 seconds of being planted, the bomb will explode and the terrorists will win. If the bomb is defused within the 45 seconds, the counter-terrorists will win. It takes five seconds to defuse a bomb with a defusal kit, or 10 seconds without one.

The other traditional maps that you will see starts with CS. Maps that start with CS are hostage rescue maps. The CTs are tasked with eliminating the terrorists or rescuing at least half of the hostages. Earlier versions of Counter-Strike included 4 hostages, but with CS: GO, this has been reduced to 2 hostages. The terrorists can win if the timer runs out before enough hostages are rescued or if they eliminate all of the CTs.

Typically after the first round ends, you will now have some cash to buy weapons or equipment (the amount of cash you receive per round is based on who won the previous round). At the start of the round, after accessing the buy screen, you will see a pie chart with 6 categories. The first category is pistols, and here you can view the various pistols that are available for purchase. The second category is heavy weapons, which includes machine guns and shotguns, typically used for close quarter combat. These typically have large spray patterns, high recoil, and can be difficult to aim with. Our third category is SMGs, or Sub-Machine Guns. The recoil and spray pattern for SMGs is slightly improved over the heavy weapons, and are traditionally used for medium-close combat. Our fourth category will include our rifles. This includes our assault rifles and sniper rifles. Our fifth category is labeled Gear, and will include Kevlar Vest, Kevlar vest + helmet, the Zeus x27 (stun gun), and defusal kits (CT’s only). Our last slot, grenades, will include all the grenades available in the game.

After buying a weapon, learning the right sensitivity for your mouse is important. This is a “feeling out” type system, and you want to be comfortable with your mouse movement. Something you can always do is starting out by shooting at a wall and seeing where your shots land. If your shots are landing a lot to the left, you want to turn your sensitivity down. If it lands to the right, you want to increase your sensitivity. Strafing is also important in CS: GO. When using a rifle, you will notice that shooting while moving will make your aim very sporadic.

Learning to quickly stop, shoot a few rounds, and then find cover is a key aspect to the game. If you fire off rounds in quick succession, you will notice a spray pattern that will move upwards. A typical strategy employed is to fire off a shot every .5 seconds in order to reduce any recoil and consequently, spray. If you do have to fire off shots in quick recession, you want to move your crosshair down while shooting.

Movement and map awareness is huge is CS: GO. Players can hear you running, walking, and even reloading. Sneaking around corners is important. In hallways, you always want to check corners and hiding places. When jumping on to tall object, holding CTRL (crouching) while jumping will increase your range. Moving slowly and cautiously, especially when you’re not near teammates, is imperative in CS: GO.