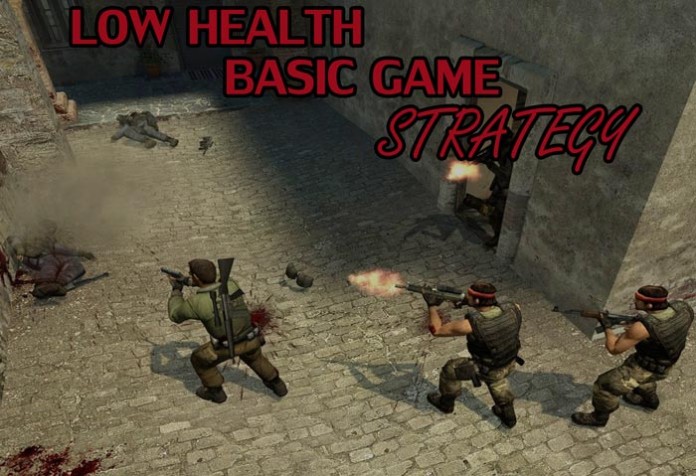 When we discuss gaming strategy, there are a number of factors we have to consider – the purpose of the round(s), the opponents’ moving patterns, the abilities of our teammates, the weapons we can afford to purchase and so on. Often, we find ourselves low on health. Usually this would happen in the middle of the round or if we are lucky – at the very end.

Whatever the case is, low health calls for a change in our approach to the game. In this article I will present a seasoned player’s viewpoint on redesigning our game when we are low on health. Different players, with different abilities and experience will have a different approach to the matter, so feel free to share your own low health tactics in the comments section below. Let’s get started!

This is the most important thing and it has to come first. Being low on health does not necessarily mean that you can’t keep scoring or that you are useless to your team. The first thing you need to realize is that at this point you have to be more careful, avoid taking unnecessary risks and change your approach in order to make the most out of what you have left. Keep in mind that your opponent has to do very little damage to you before he prevails, so you must exploit any chance to gain advantage.

Often I have come across players who, frankly, don’t believe that they can still carry out a decent round. If you are convinced that you are as good as dead then you really are! Players who think that are more or less finished will usually do something extreme like rush against the opposite team on their own, go straight to their base looking for a final lucky kill or just completely lose orientation and get killed due to lack of concentration.

Don’t lose your common sense and don’t soften up. There are still plenty of opportunities for kills and you need to find them or create them yourselves. Playing when you are low on health certainly challenges your skills, but even more so, it challenges your mental stability and endurance.

Stay Away From Battles That Require Full Health

You can’t afford to take part in every action developing on the map. If there is a crowded exchange of fire it may be better to stay out of it. Where there is a group of players, there will also be series of grenades flying towards them, looking to finish someone. Getting in the middle of a battle like that, will most probably cost you your life. It is better to hold back and observe the action as it unfolds.

If you see an opportunity for a kill – seize it. If you spot an enemy player running away for his life – try to put him asleep. If your teammates are losing – you better get out of there, as you won’t be able to fight back the advancing enemy survivors. Whatever the situation, try to stay out of areas that are being constantly sprayed on with bullets. A wounded animal will not attack a group of predators. Instead it will look for ways to survive and outplay, and outsmart them.

Being low on health is a disadvantage itself, so you must find a way to compensate for that. If you have the appropriate weapon, fight from a greater distance. If you know a great hideout – use it, but don’t forget to move and change your position. If you can surprise your enemy and take their life, do it, but don’t put yourself in dead-end situations.

Stop your music and start listening for footsteps. If you know that someone is approaching, you will already have an advantage and more importantly, you get choices. You could either go for the kill and try to surprise them, or if the circumstances call for it – run for your life. When you are low on health you can’t afford to constantly advance against the enemy team, so find the balance between attacking and holding back, rushing in on or chasing, and staying covered.

Beginners usually adopt one of two forms of gaming. They will either rush on their own, looking for action, or they will stay behind and look for cover. When you are low on health, your action should be leaning towards the second option. Don’t lead the attack, always move from one cover to the next with minimal exposure. When you decide to engage in a battle, try to surprise the enemy and catch them unprepared or look for other advantages.

There are two things I would also like to suggest not to do. Both of them are fairly well known and if you spend enough time on the servers, you would probably get a chance to witness them.

DO NOT pull out your knife and chase the enemy from behind. If you are the kind of player who takes pride in killing other players from behind, using your knife, then at least try not to do it when you are low on health. It is way too risky and it isn’t worth it.
DO NOT kill yourself by throwing a grenade against a wall. If you feel that there is no way you could make something out of the round, at least go ahead and find an enemy to face. Die like a man (or girl)! Do it with dignity.