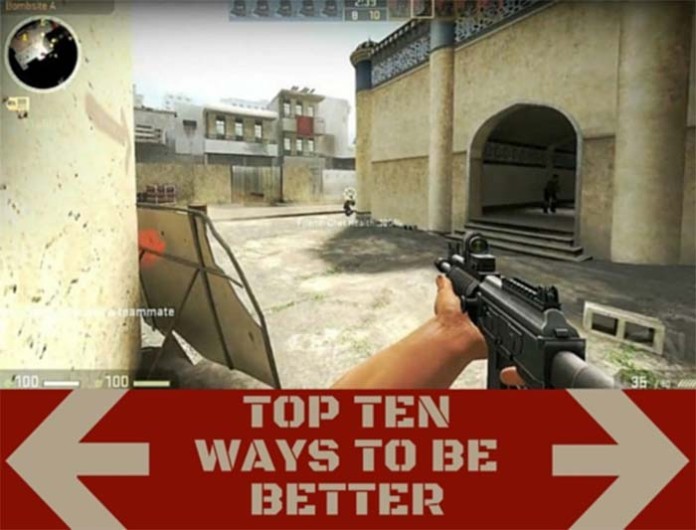 Have you been playing Counter-Strike: Global Offensive for a while now and feel like your skill could improve? Want to be considered a Pro? As it turns out, it takes a lot more than being able to aim a crosshair at an opponent’s face. Below, we’re going to take a look at the top ten ways you can improve your play.

One of the top ways to improve your play is to make sure it’s an even playing field. If you have an outdated rig or an internet connection you purchased at Walmart, you’re at a disadvantage. Counter-Strike borders on the control of realism and combat can be very unforgiving if your frame rates drop at the wrong time. Make sure your computer
can handle at least 60 FPS. This will drastically improve your game experience.

Movement can be more critical to your success in Counter-Strike than your ability to aim and react. Moving while firing will never be as accurate as completely standing still and then firing. Learning to find the exact time to stop moving, firing, and then moving again is
critical.

Teamwork is huge in Counter-Strike. Being able to cohesively work as one unit allows your team to cover as many checkpoints on the map as possible. As the Counter-Terrorists on bomb maps, the team has to be able to cover both bomb sites and respond in a quick manner. The Terrorists need to decide on a strategy. Do you rush one bomb site, setup a
distraction at another, or slow rush a bombsite? On hostage maps, the Counter-Terrorists have to be able to move through checkpoints and cover all angles. The Terrorists need to be able to cover all entrance points and communicate when they see motion. The more
teamwork and communication there is the more cohesiveness and resemblance of one unit you have.

The stutter step, or the stop shoot, is a great technique to use when peeking around corners. Basically, while strafing to peek around a corner, tap the opposite directional movement key to completely halt any movements. Holding down the key too long will start your movement back towards the opposite direction instead of a complete halt.
Practice this motion over and over again to make it feel like you’re not even stopping. Now find a wall with a small square in it, and continue this stutter step motion while firing. Try to land your shots in the square. Once you master this technique, you will be able to place accurate shots while juking back and forth.

You should never blindly walk around corners. You opponent immediately has the upper hand; he will see you coming infinitely sooner then you will be able to see him. The only exception should be if you’re scope firing with a sniper rifle. In busy corridors, such as the
de_dust2 conjunction and the cs_office building, employing smoke grenades and flash bangs is strongly recommended. If you are the first around a corner, use full speed so your opponent doesn’t hear your initial momentum. This way you can peek at full speed while
prefiring (see below). Have a decision in place to retreat or to hard advance if there is an opponent around that corner before you proceed.

While running through various maps, it’s important to limit your exposure to angles as much as possible. You always want to focus on advancing towards an inside lane. By playing the inside lane, you’re always on the inside of the threatening corner. The reason you want to play the inside corner, is that an opponent who peeks around the corner has to fully expose himself to you in order to get a good shot off. This gives you the upper hand at landing your shot first. An example of this is in de_dust2, when you should hug the left wall as Terrorists push towards bombsite A.

8) Watch Demos of Other Players

While the proverbial “Practice always makes perfect” is true, watching professional matches can be a huge boost to your own gameplay. The small intricacies like the various ways of moving, aiming, shooting, and reacting to different situations that professionals make can help you immensely.

Learning the encounter points for each map will give you a huge advantage. Predetermining where enemies are and prefiring into a location while peeking corners gives you the advantage. If you know your opponent’s position, moving and shooting in a single action is always the best technique.

When you make an instinctual decision, go with it. Don’t back down. In a 1vs1 situation, I’ll see players immediately go for a grenade or flashbang. You have a gun, go in, aim, and secure your kill. Don’t panic.

Above all, stick with it and have fun. Embrace the Counter-Strike community as your own and keep plugging away. With work, comes skill.