It was another championship weekend for CS:GO and another dominating performance by a certain French team. If you were not watching the Call of Duty Championships 2015 (awesome btw) then you saw Team EnVyUs assert their dominance in their second championship tournament in a row.

Team EnVyUs, Virtus.pro, Titan, Natus Vincere, Team SoloMid, and Ninjas in Pyjamas competed in Kiev, Ukraine for the StarLadder StarSeries 12 Championship. This three day double-elimination event had a prize pool of $50,000 and since I could not be in Kiev I streamed the action on Twitch TV.

In Round 1 NiP crushed Titan 2-0 in this best of three format but Titan did not go down without a fight. In the first map (de_cache) after being down 15-10, Titan won 5 in a row to tie the map but NiP won in triple overtime. In the second map Titan kept the momentum for an 8-1 lead but could not match NiP’s tactics and unable to build up an economy. NiP quickly won 15 rounds to a final score of 16-11 winning the match and advancing to Round 2. The other match of Round 1 saw NaVi narrowly beating TSM 2-1.

In Round 2 we see the first matches of VP and EnVyUs, they each had a pass on the first round. NiP faced off with VP on the de_mirage map, which VP is known for. VP could not get any momentum started and lost the first 7 rounds in a row before they could win one. NiP had an amazing first half winning 14-1 and they were looking strong. VP was only able to win 5 more rounds before NiP closed out their best map at 16-6.

The second map, de_inferno, was not much better. NiP amassed a huge lead at the half of 12-3 and VP need to get something started. In the second half NiP took the pistol round and ended the match with 16-6. This moved NiP onto Round 3 and VP moved to the lower bracket to play TSM.

The other highly watched match of Round 2 was Team EnVyUs making their first appearance against NaVi. This match was guaranteed to offer lots of action. The first map was de_inferno and that was EnVyUs first pick. It looked like NaVi might get something started by climbing to a 5 round lead early before EnVyUs could win one. Then NaVi managed to climb to a 7 round lead. EnVyUs did not let that discourage them as they rallied and closed the half down only 1, 8-1 NaVi.  The second half saw more NaVi action as they kept EnVyUs down and won the map 16-12.

The second map of the match of de_overpass (NaVi’s pick) and NaVi came out of the gate strong winning the first 8 rounds in a row. EnVyUs was not going to let their ESL Katowice rivals get away with it so they rallied back and closed the first half at 8-7. He second half was an absolute battle back and forth in excellent professional action. EnVyUs finally won their first map of the series at 16-14. The third and final map was de_nuke and the EnVyUs
beast finally awoke! They steamrolled over NaVi closing the map 16-2 and advancing to the finals. NaVi moved to the lower bracket to play Titan.

The Grand Final saw Team EnVyUs and Ninjas in Pyjamas battling for the series win, trophy, bragging rights and prize money for the second weekend in a row! The ink is still wet on EnVyUs’s  Gfinity Spring Masters I Championship title won last weekend in a finals matchup with NiP. Feeling extremely confident EnVyUs opened up strong on de_cache taking the pistol and the first 3 rounds. NiP managed to win 2 rounds before EnVyUs ran straight up to nine rounds. A frustrated NiP won 3 more rounds closing out the half at 10-5. In the second half EnVyUs came back strong winning the pistol and the next two rounds. NiP finally able to get a bid and was able to win a few rounds before EnVyUs closed out the map at 16-9.

The second and final map was de_inferno. NiP needed to capitalize on the moment remembering their strong performance at ESL Katowice and get something started. I’m not sure anything else could have gone, more perfectly, in the opposite direction then this map. EnVyUs had played everything right, winning the pistol round and capitalizing on bonuses to drive their economy up. By the third round $12,000 was already in the bank. NiP was only able to stop the EnVyUs bullet train to win only one round and finishing the half to a devastating 14-1. In the second half EnVyUs did not let up. They won the second pistol round and erased all hopes for NiP finishing the map 16-1 and winning the series.

NiP played TSM in the lower bracket final. The first map was de_dust2 and NiP won it 16-2. The second map was de_nuke and TSM was hoping their map pick win bring them a win, sadly it did not. It was a close round but NiP won it at 16-13.

The prize money distribution is:

Congratulations Team EnVyUs! What a way to close out March 2015! 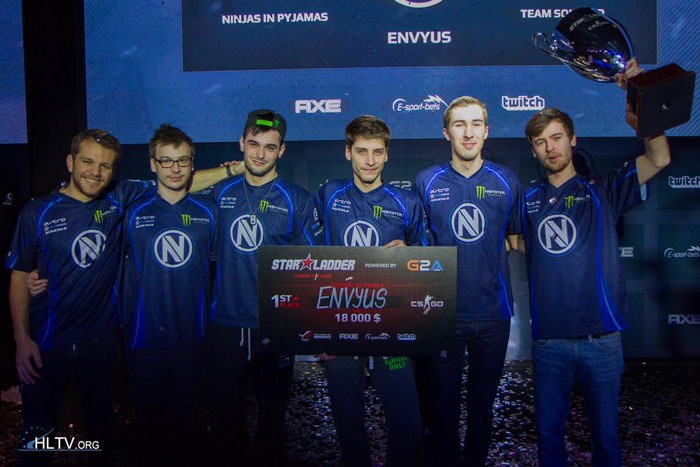 A Look at the Map cs_assault in Counter-Strike: Global Offensive

A Look at the Map de_dust2 in Counter-Strike: Global Offensive

Counter-Strike Advanced Weapons That Are Worth It

A Look at the Map cs_assault in Counter-Strike: Global Offensive

A Look at the Map de_dust2 in Counter-Strike: Global Offensive