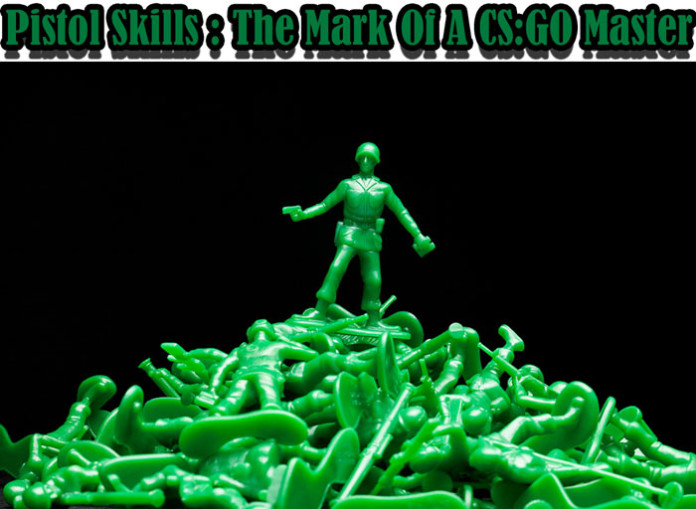 Pistol rounds may not be the favorites of rank-and-file CS:GO players, but one has to understand that this is where the men are separated from the boys. Pros have mad pistol skills and if you’ve seen some of the action of the last few Counter-Strike tourneys, you know that pistol skills are not just valued among pros, spectators are rather fond of them too. After all, there are few feats of CS:GO skill as impressive as Happy’s killing off of the entire opposing team with his Deagle, or Flush’s successful site-rush counter with USP-S. There’s just something appealing about being under-gunned and prevailing against the odds: it’s the sort of stuff heroes are made of.

How can you improve your pistol skills though?  – and obviously, we’re not talking about hitting a headshot-only server and trying to click on people’s heads for 12 hours straight. While that helps too (we’re not trying to take anything away from the age-old adage of “practice makes perfect”) there are few more subtle ways to improve your chances, ways
your opponents may not be that likely to cover as eagerly as the practice part.

One of the first of these off-the-beaten-path factors to consider is economy: get aggressive in this respect. Spend that meager bankroll asap and instead of saving your money for the later rounds, try to win as many early ones as possible. Getting aggressive action-wise also makes economic sense, since losing a round with a bomb-plant on a CT-sided map earns more for your side than a dragged-on round which you end up losing anyway, without a plant.

In regards to what you should spend that little money on: your choices will be fairly straightforward. There are new guns, armor, flashes and grenades as well as a defuse kit for the CT side. A layman would think that personal preference is the best advisor here, but he would be wrong: a pro knows that where one plays dictates the equipment he should focus on. For instance, a player looking to block off a choke-point will value the tactical advantages conferred by various flashes and smoke-grenades. Those playing mid will want to go for the defuse kit if playing CT. Here’s why that choice is obvious: the mid CT is most likely to rotate to a bomb-site when it’s lost, and as such, he will probably find a plant there. Even if he happens to die before he can put it to use, he will have pre-positioned the kit for another defender rushing to the lost site to pick it up. For a mid T, the choices are more lax: he can opt for smokes/flashes to hinder rotation, but a good gun is also handy or armor, when it comes to defending a taken site.

For a long, armor’s always a good choice, as is a good long-rage weapon, if his aiming does indeed justify the latter.

Last, but not least: strafing never goes out of style, and due to the aiming mechanics of CS:GO, it is quite a must in this instance. Except for the long-range weapons like USP-S and Deagle, one will have to get close to the opposition for the kill, and that means plenty of strafing. Given how shots are only delivered to the crosshairs when one’s velocity is zero, it seems like one can only pick his poison by standing still (never a good idea) or running and spraying with zero accuracy (also not an optimal approach). What you can do here though is change direction during a strafe. This is when your velocity hits zero, even
though you practically never stop moving. The shot needs to be taken exactly when you change direction, which in itself is quite a feat to accomplish.